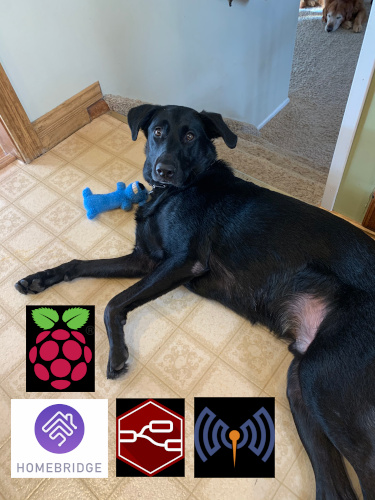 I hope everyone had a relaxing holiday and a great start to the New Year!

I apologize for the lack of content recently. Starting around mid-December, my day job got very hectic as we focused on year-end activities and uncovered some issues which we are still sorting out. Between this, the holidays with my family, and a new (fury) addition to the family, I haven’t had the bandwidth to keep up with the site.

I have been using Notion to keep my life organized though, and the stress of the last month or two would have been much worse without it! I’m using the new timeline feature to track some projects at work and will write an article on my setup and how it’s been using it.

I’ve also taken a deep dive into the world of Linux and Home Automation. Admittedly, this is where any free time I have has been spent.

I’ve had my Phillips Hue bulbs active in the Apple iOS Home application, but many of my other “smart” devices were not supported by HomeKit, and therefore could not communicate with the Home app.

I stumbled across a Linux system, HomeBridge, which is basically an application that you keep running and connects to the iOS Home ap. Through HomeBridge, you can install plugins for all the devices not natively supported by HomeKit and make them compatible.

For example, I can see and control my Ring Doorbell through the Home app, and my Nest (Google) Thermostat.

But I continued deeper down the rabbit hole...

Another system, Node-Red, also runs on Linux and is “automation on steroids”. The GUI of the system is very robust, even for those without a programming background. However, you can also embed functions into the automation using JavaScript. The possibilities of how you can set up your automation are endless.

When I got stuck and couldn’t figure out how to accomplish something exactly the way I wanted, I learned MQTT (Mosquitto), which is basically the protocol that IoT devices use to speak to one another. Again, installed a “broker” on Linux and a plug-in on Node-Red, and I can send and receive MQTT messages as part of my routines.

Sorry for carrying on. The geek in me is having a blast with all of this!

I bought a CanaKit Raspberry P 4i to run these services. While on Amazon, I also ordered a pack of NFC chips. I’d be happy to go into detail on how I set this all up (and I’m sure I will at some point).

Now that I have everything running, I have a NFC chip (about the size of a quarter) next to my daughter’s lamp. By touching the chip with my phone, I’m able to send a MQTT message to the Linux server that Node-Red reads and, based on the time of day, turns on/off her lamp and nightlight and sets the programmed brightness.

On New Year’s Day, we added another addition to our family. Milo, a three-year-old black lab. We have a nine-year-old golden retriever, and I’ve always wanted a second dog. My kids love them, as do my wife and I. An opportunity arose where Milo’s original owners had to reluctantly look for a new home for him and through a friend of a friend, they put us in touch.

We love Milo but forgot how much energy younger dogs have! After a few days, he was comfortable in his new home and is doing great. Both dogs get along great and we couldn’t be happier.

I teased an upcoming book review a few times. I still haven’t wrote a full review, however, as they gave me a free copy of the book for an honest review, I did put a brief review up on GoodReads. Designing the Mind, by Ryan Bush, brought together various topics I’ve been reading related to self-improvement and psychology in a true system thinking mindset. Here is a link to the book recently released on Amazon.

Designing the Mind is a blend of psychology, self-improvement and systems thinking; explained through the lens of a computer programmer. Ryan Bush does an excellent job of comparing our brain to a computer’s hardware, and our mind as the software that operates our brain. He keeps the technical jargon limited and explains the parallels in simple terms. With this high level background, he explains how each event that plays out in our minds is an algorithm. And by noticing these repeating sets of inputs and outputs, we can re-program our minds to correct unwanted behavior and create new habits.

I’m not sure when I will get back to a normal schedule as it relates to the website. I will, at the very least, make a blog post once a month and send out a monthly newsletter. As my workload gets back to a manageable pace, I will dedicate more time to brining you additional content.

Finally, I’d like to thank you all for your continued support. Despite my absence, we saw a large uptick in visitor traffic around the new year and have had many people join our growing community.

As always, I love to hear from everyone. If you have any Linux or Home Automation tips or tricks, I’d love to hear them.